The meeting conveyed the spirit of the speeches made by Yu Xubo, Vice Secretary of the Party Group and Wan Zaotian, Vice President of the Group. China's textile special management and self inspection and self correction agencies have been set up, and relevant work has been studied and deployed.

The meeting emphasized that we should attach great importance to special governance and self-checking and self-correcting work, further enhance ideological awareness and political standing, thoroughly study and implement the spirit of General Secretary Xi Jinping's important speech on the strict administration of the Party in an all-round way and the requirements for the deployment of the group Party groups, firmly establish the "four consciousness", resolutely implement the "two safeguards" and earnestly increase it. We must do a good job of special responsibility and self-determination, self-determination and conscientiousness.

The meeting demanded that special governance and self-checking and self-correcting work should be closely integrated with the rectification of feedback problems from the central inspection, that special work plans should be formulated carefully, and that overall planning, rational arrangement and integration should be promoted. Special management and self-checking and self-correcting work should be closely combined with China's textile industry, and mirror, target and focus problems should be effectively found, so as to dig out and solve the problems of the company. We should lay down the main responsibility of special governance and self-examination and self-correction work, put ourselves in it, put responsibility in it, put work in it, reflect on the rectification step by step, resolutely achieve "six in place" and ensure the effectiveness of the rectification work.

Members of the Chinese Textile Party Committee, secretaries of grass-roots Party branches and heads of functional departments and business units attended the meeting.

Share:
PREV:Luan Richeng listened to the four Department's inspection report on rectificatio...
NEWX:Head of the national economic and Trade Commission of the national development a...
Related news 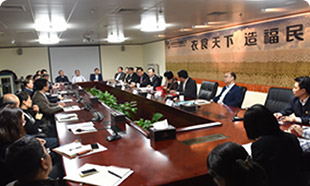